As Executive Function coaches, we find that many of the people we work with feel disheartened or stressed when they fail to reach their self-improvement goals. After all, when you work to change your habits, you're putting yourself in a vulnerable position where you're trusting that you are capable of making a change. This is why it's often so upsetting, particularly for those with Executive Function challenges or ADHD who may feel like they're fighting an uphill battle against their brain. As a result, we may label ourselves as lazy or unmotivated, further diminishing our confidence and making it far less likely that we'll actually change in the long run. But what if I told you those snap judgments are completely unfair? (Because they are!)

In reality, it's far more likely that you just haven't found an approach that works for your brain... yet! There are a ton of different ways to manage how we react to failure. I’m going to cover three main strategies for managing failure that you can experiment with that are all interconnected. In other words, trying one will often naturally involve one or both of the others. I’ll do my best to explain each and you can try them out and see what might work for you or your child.

Thomas Edison once noted, “I have not failed. I’ve just found 10,000 ways that won’t work.” Pretty freeing to consider failure in that light, isn’t it? In other words, instead of seeing failure as a lack of success, try to see it as you successfully found a way that doesn’t work.

Recently, I was working with an adult client of mine who has a strategy he uses to manage his anxiety about the week to come. He takes time on Sunday night to look over and plan for the upcoming week. The previous week, he didn’t do this and he noticed some of his anxiety started to creep up. I know it sounds odd - but as his coach, I was actually glad he hadn’t done it. This was a great opportunity for some reflection. This experience helped remind him how effective his Sunday night planning actually is when he follows through with it - and as a result, he became more committed than ever to this strategy. So, while technically, this was a failure - he did not meet the expectation of Sunday night planning - not doing it was incredibly informative for him.

I think there’s almost more value in discovering what doesn’t work than what does. We learn more about ourselves and are forced to think creatively. The strategies we end up using after we’ve failed are more solid because they’re built from your response to what didn’t work. A strategy that you try and it works on the first try isn’t as rock-solid because you haven’t encountered any variables that will test it. Failing while trying new strategies, in the end, I think makes a more durable system that can survive long term.

Of course, if you find something that works for you on your first try, awesome! Just know that it might not always work, depending on what’s going on in your life, and that’s totally okay. I like to think that the strategies that we know work for us usually are patiently waiting for us when we’re ready to go back to them.

Strategy 2: Be Mindful of Self-Talk

You can combine the reframing strategy I described above with self-talk. Self-talk is the thoughts or speech that we direct toward ourselves. It can be positive and motivational (“Whoa, that didn’t work as I had hoped. I know I can up with a better solution to leaving the house on time!”) or it can end up being negative and ultimately de-motivating (“You dummy, what makes you think you could ever stop being late for everything?”).

When engaging in self-talk, I’ve found that referring to myself in the third person is super useful. It helps put a little distance between what I’m saying and myself and helps cut down on negative self-talk. I like to keep in mind the framework of “would I talk to a friend like that?” in my self-talk. This encourages a kinder view of my perceived failure or shortcoming. If I’m struggling to maintain a commitment to a healthy habit I’m trying to cultivate, for example, I might say to myself, “You can do this, Hannah. Just because you didn’t follow through yesterday doesn’t erase all the gains you’ve made so far.” Isn’t that what a good friend might tell you?

One way to approach trying a new tool or strategy is by framing these things as experiments - not as a referendum on your character or the value of trying to change your habits. One of the benefits is that it lowers the stakes. Heck, we all know experiments often fail, right? But those very failures can yield some really useful information to use when we try again - in a slightly different way.

One of my coaching colleagues has a great strategy she uses with her clients when they’re setting their weekly commitments - she calls them “weekly experiments” instead. Trying something new is important, but the most important thing about trying it is to reflect on it after you try. Just like scientists ask questions about the results of their experiments, we can do the same! I encourage you to put on your metaphorical white lab coat and get curious when something didn’t turn out as you had planned. Ask questions! How did it feel? What did you notice? What worked about it? What didn’t work?

Change takes time. It’s really hard and it’s going to be filled with many of these so-called failures. If we can accept that it’s a process that takes time and reframe our so-called “failures” as a positive thing, that takes you one step further to lasting and meaningful change in your habits. Reaching out for help, whether it’s from an EF coach, your friend, another caregiver on the playground after school, or your running buddy can make all the difference as you navigate the ups and downs of behavior change in yourself or someone you love.

Photo by Eastman Childs on Unsplash 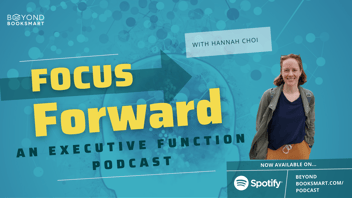 Looking for additional support on coping with failure and Executive Function improvement? Check out our podcast where we discuss this topic and more with expert insights and perspectives.

Hannah Choi, MA is an Executive Function Coach and host of the host of Beyond BookSmart's podcast, Focus Forward. She has over 20 years of experience working with students of all ages, from preschool to college students. Hannah is a graduate of The University of Rochester where she earned a BA in Psychology, and The University of California at Santa Barbara, where she earned an MA in Education.