Imagine Tom Brady’s first day of practice as a quarterback: perhaps he misses a snap and gets sacked.  He 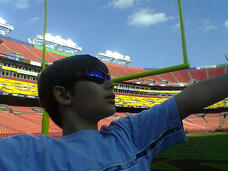 probably throws a few interceptions and fumbles once.  Most likely, he forgot two of the play calls and tossed the football to an empty spot on the field.  So how does this awkward start eventually transform so that Brady becomes one of the most successful quarterbacks in the NFL?

Despite having an excellent quarterback, the Patriots still lose games.  In fact, last week was Brady’s “second-biggest loss of his career” according to The Associated Press.  This week, the Patriots crushed the Bengals: a team who entered the matchup undefeated.  The Patriots, and their fans, know that they can’t expect to win every single game, but they can certainly try.  They still have practice sessions.  They still review game tapes. They still turn to their coaches for feedback, suggestions, new strategies and new approaches.  The reason for all of these critical moves is because the Patriots – like all professional sports teams – acknowledge that improving your skills takes time, and that practicing with the guidance of a coach is one of the best ways of spending that time.

This is analogous to Executive Function coaching, except that instead of being strong in one sport, students are expected to be strong across a variety of subject areas which often require different sets of skills (such as organization, time management, emotional control, planning, and prioritizing).  Students need to lose games (fail a quiz or forget to do a homework assignment) so that they can have an opportunity for reflection, develop the motivation to make changes in approaches and habits, and receive encouragement to continue to practice (study).  Students also need to review game tapes (a recent test, essay or project) and strategize about how to make improvements before the next 'big game'.  And students who have regular practice sessions with an Executive Function coach so he or she can introduce, demonstrate, and encourage using new techniques and strategies, have a competitive advantage. Of course the student will still need to practice independently between coaching sessions.

One week’s worth of practice won’t guarantee proficiency, though.  Coach Bill Belichick may have guided Brady through a particular side-step sequence to avoid a sack, but until Brady owns that technique in his muscle memory, he’ll certainly be knocked down a few times.  It’s not easy to think of your child getting “knocked down” in academics; in fact, it’s one of the last things a parent wants to happen.  Yet sometimes, getting knocked down can be a good thing because it means there’s room for mindful reflection, a shift in strategy, and improvement. It won’t happen overnight, or even in one semester, but with continued practice, support, and guidance, it is easy to imagine your child becoming a star academic athlete.

Want to learn more about Executive Function Coaching for your future star academic athlete? Click below.

IQ and Executive Function Skills: The Engine and the Fuel