How to Succeed in School by Partnering With Video Games

Like many other parents during the holiday season, I recently found myself in a store purchasing a video game that I did not wholeheartedly want to buy, but that someone on my list so desperately wanted. The sales counter in this particular store provides a glimpse into the range of emotions this popular pastime generates. There were the eager eyes just high enough to see the exchange of money over the counter, fists clenched in excitement. There were also pursed lips and small, almost silent, sighs as parents handed over money, looking quizzically at the game going into the bag, wondering about its appeal. It was almost as if you could hear the personal struggle taking place within each of their minds; this is what my kid wants most in the world, and I want him to be happy, but I also know the arguments that will undoubtedly take place when it comes to turning this thing off.

If you are the parent of a child who loves video games, you may be grappling with the challenge of limiting the screen time that is so precious to your child, while also putting forth an effort to give her some much needed and healthy boundaries. You may feel excited to witness the triumph that is beating an “impossible” level, but also be worried about the refereeing that inevitably falls to you as the parent when it comes to balancing all that endless fun with homework, sleep, and family time. It would be nice if there were maybe a series of buttons on a controller you could press, or a “cheat” as they call it in the gaming world, to bypass such an argument. Alas, none such magic has been discovered to date. Instead, we created a short guide to equip you with some practical and easy techniques you can use to make the job of partnering with video games a little bit easier.

According to Carnegie Mellon University’s research, the average student moderately to very interested in video games will spend 10,000 hours gaming by the time he or she turns 21. Now, this is something to take note of for many reasons, but perhaps most significantly for the reason that Malcolm Gladwell, author of Outliers, has cited 10,000 as exactly the number of hours it takes to practice something enough that one would be considered an expert in that skill, or said to have mastered that skill. So, if your child has joined ranks with many other teens in this world and becomes a “gamer”, why not get the most out of all that practice time and strategically use certain aspects of it to help your child succeed in school?

There are many arguments to be made for and against students spending so much time on gaming. Regardless of which side of this debate you stand on, you will likely encounter moments in parenting during which you will think to yourself “I wish she could take half the efforts she puts into Minecraft and put that towards her schoolwork!” Through helping your child draw conclusions about the similarities between skills required in the gaming world and skills required in real life, you can help bolster his or her confidence and improve academic performance.

Click below to download our tips for how to succeed in school through partnering with video games. 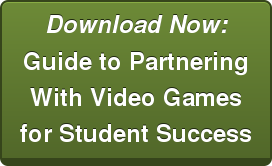 Laura is a senior level Executive Function coach, Supervisor, Intake Coordinator, and member of the Beyond BookSmart Professional Development team for our Boston branch. In her role, she supports students, families, and coaches in their collective efforts to help students experience success. She holds a Master's degree in Educational Leadership from Bank Street College of Education, and a Bachelor's degree in Special Education and Elementary Education from Salve Regina University. Her experience teaching in various classroom settings in the states of New York, Rhode Island, and Massachusetts has proven to her that above all, students crave the tools that will help them to navigate both the world of school and the world around them. Through years of being an Executive Function coach, she has found (and strongly believes) that what truly counts when it comes to giving children a quality education is the explicit teaching of tools and strategies that enhance Executive Functioning, leading to true and lasting independence, self-advocacy and empowerment in children and teens.