Editor’s note: This week, we feature guest bloggers Michael Keesler and Jason Navon of Fox and Ferns Mental Health in Philadelphia, PA. Please read more about Michael and Jason below.

In fall of 2000, a 16-year-old Michael Keesler took his first class at the Asheville 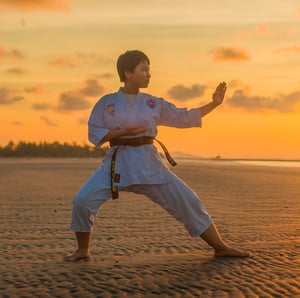 Taekwondo Academy. It would be the first of many classes to follow, each beginning with bowing in and reciting the tenets of the school: Honor, Courtesy, Integrity, Perseverance, Self-Control, Courage, and Community. Fast-forward nearly 20 years and Michael – now Dr. Keesler – trains less, but has a new and altogether different appreciation for martial arts training.

The Connection Between Martial Arts and Executive Function

Perseverance and self-control, for example, are tenets of a martial arts school, but they are also major components of Executive Function (EF). A neuropsychologist might re-label perseverance as sustained attention or problem-solving, or an interaction of the two. Self-control, on the other hand, might be recast as impulse control, ability to delay gratification, or automatic response inhibition. A person having perseverance and self-control has the ability to stick with a task, troubleshoot issues as they arise, and refine their approach. And they can do so while resisting the temptation to abandon the challenge, even when the payout or benefit is remote or abstract.

So why is this observation worthwhile? For one thing, research on neuroplasticity (the ability of the brain to change) reveals that training certain mental processes leads to functional and even structural changes in the brain. Neurons that fire together wire together, as the adage goes. Neuroplasticity explains why mindfulness meditation can help one remain in the present rather than ruminating on past disappointments or fretting over future worries. Neuroplasticity also provides the mechanism for improved piano playing and salsa dancing, with research confirming what grandmothers always suggested: practice does, indeed, make perfect.

Consider, then, martial arts as a tool to train Executive Function. Whereas popular media often portrays martial arts as fast-paced and combative, the reality is much more complex. Most martial arts classes incorporate some combination of ritual, warm-up, stretching, cardiovascular training, strength training, footwork/stance drills, strikes and blocks, forms or katas, and sparring. For a 45 to 60-minute period that is a lot of task-shifting for participants  - a major component of EF.

From the above list, katas are worth additional attention. Translated literally from Japanese to mean “form,” katas are purposeful executions of sequences of moves, turns, and strikes aimed at imaginary opponents. By removing the element of the aggressor, focus is instead given to perfecting technique. Although beginner katas tend to be simple, as the trainee progresses the katas get more complex. Learning (and remembering) katas can be both challenging and rewarding, as they require repeated practice, self-monitoring, troubleshooting and frustration tolerance. If we accept the entire martial arts class trains EF generally, kata practice is the proverbial weight training portion of the workout. Learning and demonstrating a kata consistently is one of the requirements to advance to the next belt, so there’s an element of motivation and reward there, too.

This brings us to the colored belts so emblematic of modern-day martial arts. Students typically begin as a white belt and graduate through the various colors until they have earned a black belt. We can think of few comparable individual extracurricular activities that facilitate setting 2 to 3-month goals, working toward them, being evaluated on one’s progress, achieving a personal feeling of accomplishment, and having a tangible and visible mark of one’s achievements. Karate students learn that perseverance pays off.

Research that Supports the Brain Benefits of Martial Arts Training

Mounting research on physical exercise as an intervention for Attention-Deficit/Hyperactivity Disorder (ADHD) suggests the effects of regular aerobic exercise can be comparable to pharmacological management of ADHD symptoms. Unfortunately, limited research has examined martial arts specifically as a tool to train Executive Function or treat ADHD specifically. But we are far from the first to argue that the connection exists and that there is benefit to be gained. For example, as observed by Dr. Matthew Morand in his doctoral dissertation, “…there is a systematic influence of meditation, rhythmic breathing, and relaxation amounting to self-hypnosis; adherence to etiquette; constant group reinforcement; mutual help and criticism; and a sense of group cohesion with shared goals and ideology…” all things that can help treat the ADHD brain. Some research has also suggested that practicing martial arts at higher levels facilitates direct structural changes in the frontal lobe of the cerebral cortex. According to Turkish researchers, repeated motor training, like that found in the practice of katas, can produce an increase in density of the white matter in the frontal lobe. The frontal lobes are worthy of our attention because in addition to containing the motor cortex that directs movement, they are also the seat of Executive Function.

Contrasted with the limited empirical evidence for using martial arts to train EF, anecdotal reports from patients and families is easier to come by. In one such case, a young adult describes his training in karate as calming, despite the athletic rigor involved. According to him: “Karate training is a chance to leave the worries and buzz of the outside world behind me. As someone with ADHD, I oftentimes find myself unable to keep track of everything on my plate, and find focusing on any single topic for any length of time difficult. However, something about going to karate changes that. I find that, after practice, I have much less trouble focusing on my work. After going to karate for a few months, I found that leaving my most important work for the evenings after karate practice results in work getting done more promptly and at a higher quality.”

In sum, exploring martial arts as a way to train Executive Function is worthwhile on both a societal and an individual scale. We suspect that research will eventually bear out what seems apparent. In the meantime, maybe it’s worth inquiring about that free class at your neighborhood martial arts school. What do you have to lose?

Photo above by Thao Le Hoang on Unsplash

Michael Keesler, JD, PhD, is a graduate of Drexel University who completed his APA Internship at UNC Chapel Hill and his neuropsychology fellowship at the University of Pennsylvania. Since completing his training, Dr. Keesler has divided his time between neuropsychological assessment and individual psychotherapy, with many therapy patients being survivors of brain injury or living with progressive neurological illness. He also teaches for Drexel Psychology, regularly publishes on topics relevant to neuropsychology, and remains involved in various organizations and outreach efforts. Dr. Keesler owns and operates Fox and Ferns Mental Health, based in the Chestnut Hill area of Philadelphia.

Jason Navon recently graduated from Drexel University with a Bachelor of Science in Psychology. While there, he focused his course work primarily around the field of Neuropsychology and Physiological Psychology. In the final stages of his education, Jason completed a co-op placement with Dr. Keesler in neuropsychological assessment and research. In the coming year, Jason will be applying to master’s programs in Psychology, focusing his research primarily on Neuropsychology. Contact Jason via email at jan99@dragons.drexel.edu.