Adults don’t always think of high school as the “real world,” but for students 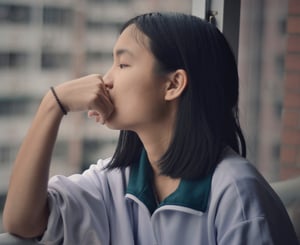 navigating that stage of life, the stress is entirely real. The academic obligations start to get more challenging and the social expectations feel more intense — just when students are beginning to add college and career decisions into the mix that will affect the rest of their lives.

While that is a lot to handle, some of that stress can be mitigated with changes to the way that they manage their demands. The two students described below illustrate the connection between stress (and the anxious feelings that come with it) and executive functioning - and how learning more effective executive functioning techniques can bring down the anxiousness and increase their success.

Where Are My Notes?

Alejandro sits down at his desk on Wednesday evening and pulls everything out of his bag. Some papers are sticking out of notebooks, some are folded within the pages of his textbooks, and others are crumpled at the bottom of the backpack. As he starts to sort through everything, he feels a wave of defeat: He can’t find the practice problem set for his Pre-Calc exam. Twenty-five minutes later, when he locates his notes, he can’t follow what he wrote during class yesterday - which is, to his dismay, the exact content that will be on the exam tomorrow. Exasperated and stressed, Alejandro logs onto Khan Academy to watch some videos and do some practice problems, crossing his fingers this material mirrors what he’ll be tested on.

A Connection Between Alejandro’s Test Stress and Executive Function

For Alejandro, the Pre-Calc exam that’s coming up is certainly causing anxiety. But that anxiety could be ameliorated by improving his organizational skills. Without having a clear place to store materials he accumulates from each class and a method for taking class notes that he can understand later, Alejandro winds up wasting time searching and then studying material he’s not totally sure is the right stuff to study. Thus, improving his organization - a key executive function skill - can go a long way to improving his test anxiety.

One thing Alejandro can implement to save himself some time when he sits down to study is a filing system. He might try a single “take home” folder system. He can compile handouts from all classes during the day, then can sort them later into a series of color-coded folders that correspond to each class. With a system like this, Alejandro will be able to locate those practice problems right away and get right to work. With respect to taking notes in class, Alejandro’s got some options here, too. He might develop a set of symbols that he can use as a shorthand when he’s taking notes rapidly. Or, with his teacher’s permission, he could use AudioNote to sync an audio recording of the lecture with his notes, which would allow him to play back the segments from class where his notes are unclear. Another option would be for Alejandro to use a set of sticky notes that he places within the textbook so that the notes he takes on each kind of problem are directly linked to the discussion of them in the textbook, giving him immediate access to reference material if his notes aren’t super clear.

The Curse of Plenty

Destiny feels the ball of stress that she’s been carrying in her stomach tighten when she looks at her calendar. Saturday, March 15th is circled - the day she’ll be taking her SATs. She’s not worried about taking the test itself; she’s worried about the dwindling number of days before that date arrives. She knows that she should spend as much time as she can preparing for it, but she has a big AP Government project due that Tuesday, a Biology test that Wednesday, a Latin midterm that Thursday, and a major English essay due that Friday. She knows how important the SATs are. Everyone seems to be saying that they’ll determine her whole future. But she also knows that bombing any of the tests or projects this week will sink her grades and not help the college applications she’ll be working on this fall. How can she possibly prep for the SATs, study for her tests, complete her projects, and, you know, have a life?

Destiny’s situation is unquestionably a stressful one. But the stress in this case is being intensified by indecision: Destiny can’t seem to decide whether it’s more important for her to prep for SATs or AP Bio on a given night. The executive functioning challenge causing this stress is difficulty in planning and prioritizing; Destiny just can’t feel good about how she’s spending her time because she can’t figure out what’s important. If she could separate these tasks into a clear hierarchy, she’d still have a lot to do, but she’d be far less wracked with indecision and far more willing to charge into her work.

How to Order the Chaos

The key for Destiny is to identify the subtle gradations amidst the many things in her life that are so far just marked “important!” One method of doing that is using Covey quadrants, which allows her to categorize her to-dos depending on both their urgency and their importance. In this case, the SAT prep might be important but not urgent, while her AP Government project is important and urgent, meaning she should tackle that first before shifting gears to her SAT flashcards. (And keeping up Snapchat streaks with her friends, she has to admit, feels urgent but isn’t really important.)

To get even more fine-grained, Destiny might use a grade calculator to figure out which of this week’s projects will have the biggest impact on her grade. Doing this, she might realize that the AP Bio test - because it’s one of many this term - is only worth 5% of her grade. Or, she might realize that the high A that she’s rocking in her English class gives her a bit of leeway if this particular essay isn’t quite up to her usual high standards. With this in mind, she can better determine how to balance SAT prep with work for classes (and maybe even keep those Snapchat streaks going, too).

High school is stressful for a lot of reasons, but you can take that stress down a notch or two by mastering some executive functioning skills. 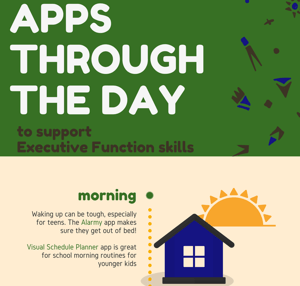 Download our infographic that describes 8 apps students can use throughout the day to help them manage time, stay focused and organized, and be productive.

A Day in the Life of a High Schooler wit...