If You Think School Isn't the Real World for Students...

By Brittany Peterson and Dan Messier 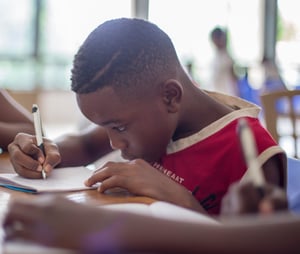 The “real” world. When exactly did we somehow all agree to identify the non-academic world as some separate place and time in which things will finally become real? It’s time to quash this concept because, for students, school is the real world. The skills they need to get through school happen to be highly relevant to the skills they’ll need to tackle in the world beyond textbooks, pop quizzes, and report cards.

Maybe you can guess some of the parallels already, such as:

The relevance of group projects: helps your child learn to collaborate with colleagues and plan out work.

The importance of studying flashcards for French: helps to develop the habit of learning new information and sustaining attention on less-than-thrilling tasks (sorry, French teachers!).

The significance of essay writing: Helps your child learn to communicate effectively in written form and to generate convincing arguments— like why they should receive a raise, for example.

When we take a moment to draw out the correlations, it becomes clear that the Executive Function skills needed to perform the kinds of tasks students are asked to do are the same abilities that will serve them well when navigating the demands of the workplace.

It’s also possible that the message about school not being part of the real world goes beyond just being wrong — it might be downright harmful, for a number of reasons.

1) It suggests to students that their current efforts have no value.

Take a second and imagine how it would feel for someone to say this phrase to you. Imagine all of your problems, issues, challenges - the things that take up most of your day-to-day thinking - being dismissed as unimportant. And then imagine someone older than you saying, “Well, things will be different when you get out into the real world.” Doesn’t hearing that just take the wind out of your sails? Doesn’t it make you feel as though you should save your energy, not buckle down harder? It seems to say that your current focus is all on pretend, unreal issues. And if those issues aren’t real, they don’t matter. And if they don’t matter … well, why have you been working so hard at them?

2) It’s a way of saying “My experiences matter, but yours do not.”

We’ve probably all heard a child say to an adult, “You just don’t get it!” In the same way that we don’t think kids “get it,” they don’t think we get it, either. So, since none of us actually get it, it makes sense that a child might take offense at the idea that our experiences matter much more than theirs, or that we are somehow living in a world where actual, important things happen, while they are not. And we have to imagine that we would not greet warmly someone saying that our world is not the real world.

3) It suggests an upcoming (and unrealistic) baptism by fire.

If your child comes to think of the “real world” as some other place that’s dissimilar - or even much more difficult and high-stakes - than their current world, this phrasing can create unnecessary anxiety about ever entering into the “real world.” That anxiety can contribute to students’ lack of interest in looking for a job after college and moving out on their own. In addition, it also sets up the idea that the skills they’re developing now won’t transfer into other contexts - a concept that’s simply not true. Students might think that everything is going to become much more difficult and serious when they’re out of the academic realm, convincing them that the things they did to manage their school demands won’t help them manage the working world.

We realize that abandoning this saying might put you in a difficult position: How else can you motivate your child to take things seriously? You’re the adult, after all, and you have the benefit of additional years of experience to share (and the back pain to show for it). It seems only natural to share your experience of the working world, especially if you sense that your child is behaving in ways that won’t lead to success.

So, instead of merely banishing the “real world” phrase from your vocabulary, we suggest working toward the outcome you’re hoping for with these 3 strategies.

1) Initiate the inquiry: If you want your child to see that the skills they’re developing now will be meaningful for them in other contexts, invite them to figure out how: Do you think learning to sustain your attention when reading will be useful outside of class? Where else do you imagine needing to use this kind of skill?

2) Lead by example: If your child insists that learning anything in pre-calc is irrelevant to their future, show them an example of how learning to do something difficult (like pre-calc) benefits you in a non-academic way. Often, it’s the habit of managing challenging tasks that helps us develop the ability to handle other challenging tasks.

3) Empathize together: Your kid finds reading To Kill a Mockingbird almost impossible? You get it. Reading through your insurance policies also feels impossible. Sometimes, the academic world, the work world, the “real” world … all the worlds we live in present us with moments of frustration - and that’s OK. Together, you can brainstorm an activity that helps you both recharge and re-engage with the difficult work that lies ahead: maybe it’s a few minutes of guided meditation, or a couple of yoga poses, or shooting some free-throws.

Whichever approaches you take, keep in mind that both students and adults are doing their best to navigate the daily complexities of their worlds. And that's about as real as it gets.

Photo by Santi Vedrí on Unsplash

Is the real world of your child filled with too many demands on their time and effort? Download our Priority Matrix Guide, a structured approach to helping an over-scheduled student (or adult) identify what really matters.

Not Ready for College? Essential Tactics for Gap Year Success