Brandon is a Young Adult with Failure to Launch Syndrome

annoying alarm dictating the start of the day. I grab my phone, and (after checking Twitter, Facebook, Instagram, and Snapchat) I scroll through my emails to see if there are any replies from the two places I submitted job applications to, but I’ve got nothing. Oh well. I’m sure they’re super busy anyway. Luckily I’ve got a place to crash rent-free until I hear back from somewhere.

2:30 p.m. After getting lost on Reddit for awhile, my growling stomach signals it’s time for breakfast. Mom came through and bought Peanut Butter Cap’n Crunch - I really wish I’d had that when I was at college. I pour a bowl and grab a spoon, then head back to my room to continue that Reddit thread. When I’m done I take the bowl out (so Dad won’t get mad) and toss it on the pile in the sink.

6:45 p.m. I think about hopping in the shower when Austin messages me and says he and the gang are about to do a few rounds of League of Legends. It’s rare that the five of us can all get on at the same time to play, so I message back that I’m in. I don’t have anywhere to be tonight, anyway, so the shower can wait for tomorrow.

2:15 a.m. Oh man, that episode of “The Walking Dead” was awesome. I probably should go to bed right now, but I’m only two episodes away from the season finale. The only thing I have to do tomorrow is send out another application or two. I really want to see what happens to Glenn, and Netflix is already starting the next episode, so....

We always told Brandon that he could live at home after college if he couldn’t find a job right away. We didn’t want him to be stressed out, and my goodness we’d never kick our own son out onto the streets! Brandon’s been home for three months now, and this day is pretty typical, unfortunately. He spends more time playing games on the computer and using social media on his phone than he does applying for jobs.

We don’t understand why. He’s worked so hard to get his degree - tutors, academic support advisers, study groups - but he’s not focused on the next steps. We’re trying to make everything as easy as possible for him so he can just focus on getting a job because that’s the top priority right now.

Sometimes we feel confused about why Brandon doesn’t work harder on his future and other times we’re aggravated with how lazy he can be. Can’t he at least wash his cereal bowl when he’s done with it!? We were happy to hire tutors to help him while he was in school, but who can help him now that he's beyond college?

An Executive Function Coach's Point of View on Failure to Launch

My initial step as a coach would be to chat with Brandon to uncover the barriers to success as he sees them. I'd tailor my approach with him depending on his response. If, for example, he wonders why he should work in an office all day when life's really good and easy at home, I might work with him and his parents to develop a family contract whereby Brandon has to earn his keep at home. If Brandon’s failure to launch syndrome is mainly because life is too good at home, we can work to slowly and collectively change those incentives.

However, for some young adults, it's not that they don't want a job. It’s that they feel totally overwhelmed by the idea of having to do everything on their own. For someone who's always walked to the cafeteria or the family's fridge for a meal, the idea of working at a job to make enough money to go to the grocery store to buy food to then make a meal is about 15 steps too many. In this scenario, I could work with Brandon, first to assure him that grocery shopping and paying bills isn’t that scary, and then to systematically build the skills he needs to feel comfortable living on his own. (Though if he asks me how on earth there’s such thing as color safe bleach he’s on his own.)

Or if, for example, Brandon is just discouraged at not hearing back after sending out job applications, I can start by normalizing that experience. Applying to jobs is hard and it’s even harder when you don’t hear back. (And anyway, these employers will kick themselves when they find out what they missed out on.) I can help Brandon see this as a typical experience so that he doesn’t feel unwanted and I can give him the perspectives and strategies of other clients who were in his position and who worked to get a job - and how they felt when they were successful.

Once Brandon understands that this is a typical experience, we can work on developing the Executive Function skills and strategies that will help him begin the application process again. That could be a spreadsheet where he keeps track of his applications and follow-ups, a scheduled time every day when he “clocks in” to work on pursuing jobs, and a weekly quota of new jobs to apply to. For optimal success, limiting distractions will be imperative; that might include unchecking the “play next episode automatically” button in his Netflix settings or installing an app like StayFocusd on his browser to prevent losing hours to Reddit. Not only will these things help Brandon to get a job, they’ll help him to keep it. (Bosses don’t tend to love the sorry-I’m-late-I-was-binge-watching-Netflix excuse.)

While it’s not always easy, once I get some buy-in from Brandon, I can share strategies and skills that he can work on developing to help him get where he wants to go. I can work with Brandon to help him to better see the bridge from this life to a more independent one. I can help him see the pros and the cons of his current position, help him visualize his ideal future, and, most importantly, help him see the way to get there. And, as we work to get him there together, I can be a buffer and a context-provider for failures and false starts, and his biggest cheerleader for his successes. Although failure to launch syndrome in young adults can seem like an impossible problem, Executive Function coaches have the tools to analyze the problem — the atmospheric conditions, the aerodynamics, the ignition — in order to help your kid propel himself out of the house and into his own orbit. 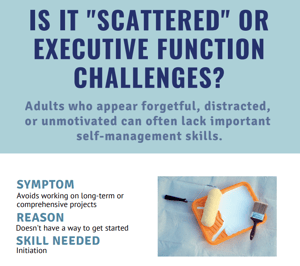 Do you - or someone you care about - appear forgetful, distracted, or unmotivated? Download our infographic describing 5 symptoms of Executive Function challenges in adults.

How to Help Your Child Get Organized

By the time the semester hits mid-October, college and high-school students are really starting to get into the thick of the school year's demands. An...