College planning can be both exciting and stressful. While students and parents ...

When I had to move when I was in college, I did what most people do: I asked my ...

As August nears its end and a new school year waits around the corner, a certain...

Middle school. For some of us, those three syllables can elicit chills of recalling social slights,

embarrassing faux pas, and other growing pains of adolescence. Decades later, things haven’t changed much. In fact, it’s still about lunchtime and who you manage to sit near. As if that whole scene isn’t stressful enough, add in Executive Function challenges for a 6th, 7th, or 8th grader and you can see why kids this age can be a ball of anxiety. Heck, elementary school was a piece of cake compared to this new setting. Now they’ve got all these different teachers who talk so fast and seem to expect you to just know how to do stuff like take notes and reach out for extra help. Let’s follow a student who is having a tough time in middle school and see how some Executive Function tools might help calm the stormy seas a bit.

Jamilah thought she was going to love Earth Science. It included 2 of her favorite things, the Earth and science - how could she go wrong? Plenty, it turns out. For one thing, there’s been a lot of stuff about rocks - who knew rocks could be so complicated? For another thing, Mr. Roche is super enthusiastic (or “extra” as Jamilah’s friends say) and sometimes he talks so quickly she cannot keep up with her notes. Last year, her teachers told the class exactly what to write down. It was so much easier! Now, Jamilah is having a really tough time listening and scribbling down notes as fast as her gel pen will allow. She’s feeling seriously stressed and not nearly as smart as she used to feel in her science classes. There’s a test coming up and she just knows she missed some information that will trip her up. She had never needed to stay for extra help with a teacher before this, so she has no idea what to expect. Would he get angry because she doesn’t understand all the information? Would it be a humiliating experience? Jamilah’s never felt this anxious and out-of-sorts about school.

An Executive Function Solution (or two)

Jamilah is starting to doubt her abilities - not because she isn’t smart enough, but because she has entered a new world of demands that she doesn't have the tools for - yet. She needs to approach things a little differently than she did in elementary school. First of all, she needs to find a more effective way to capture information in her notes. Upon closer inspection, Jamilah’s notes look like an attempt to write down every word Mr. Roche says in class. That’s a lot of words! No wonder she felt anxious. One way to lighten the load is to reassure her that good note-taking is about listening for important ideas. It’s OK to break rules of grammar and spelling in your notes and to abbreviate and put bullet points instead of complete sentences. It’s also OK to draw a picture when that conveys the information better - a sketch of that sedimentary rock that features its characteristic layers and color variations may work better than a lengthy description. If Mr. Roche uses a board or slides to provide information, Jamilah may be able to get permission to take a photo to help fill in gaps in her notes after class. Her teacher may also allow Jamilah to record what he’s saying so she can review it later. Finally, Jamilah may benefit from taking notes using a version of the Cornell Method (see sample below) that divides the page into 3 sections: main notes, key vocabulary and questions, and a summary. 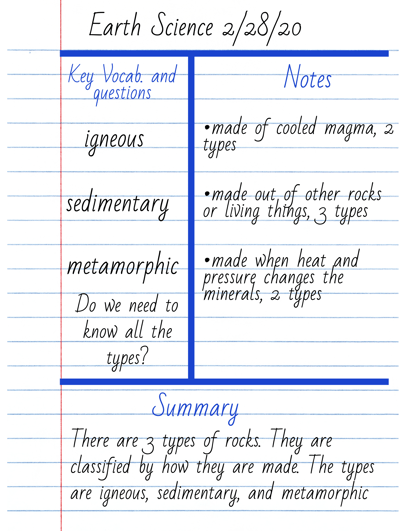 As for Jamilah’s mounting test anxiety, here’s a great opportunity to practice some self-advocacy and perspective-taking. Jamilah knows Mr. Roche loves rocks. A LOT. If she can take a moment to imagine being him, and imagining a student wanting to talk to her about rocks, well, she'd be thrilled, right? If Jamilah practices some perspective-taking, she'll be able to see that getting extra help is not a bother or irritation to Mr. Roche; he'd likely be just as enthusiastic to chat outside of class as he is during class. This will allow her to set up a meeting, go through her notes with him, get clarification, and summarize what she understands aloud to Mr. Roche to make sure she’s on the right track before she leaves.

Once Jamilah gets the hang of taking notes more efficiently and knows that Mr. Roche welcomes her visiting for extra help, she can feel less anxious. (Sometimes, he even gives a little hint about questions on the test when they meet after school.) Before you know it, her confidence returns and she’s thinking, “Hey, Earth Science kinda rocks after all!”

Jackie Hebert is the Director of Marketing and Communications for Beyond BookSmart. Whether it's managing our website, posting on our social media, authoring and editing blog articles, or creating presentations, Jackie oversees all internal and external communications at Beyond BookSmart. Before joining Beyond BookSmart in 2010, Jackie was a Speech-Language Pathologist at Needham High School. She earned her Master's degree in Speech-Language Pathology from Boston University, and her Bachelor’s Degree in Psychology from University of Massachusetts, Amherst. In addition to her work as Director of Communications, Jackie is an Executive Function Coach for Beyond BookSmart and leads presentations for parent groups throughout Massachusetts. Additionally, Jackie manages the company blog content through editing submissions, writing articles, and collaborating with professionals from outside Beyond BookSmart. She also creates video content and is our webmaster.

How to Get Your Head Into WFH (Work From Home) Mode: 4 Essential Tips

When I had to move when I was in college, I did what most people do: I asked my friends for help. And, despite the busy lives they lead, they did. (Or...

If we were to eavesdrop on the inner thoughts of some students, we might hear something like this: "There is no way I belong in this honors-level clas...

Awkward Adolescence: 4 Tips to Help Your...

For most of us, simply thinking about our early teen years can quickly produce cringe-worthy memories of awkward social interactions, questionable fas...