College students have plenty of fuel for anxiety. They’re in a social and academic 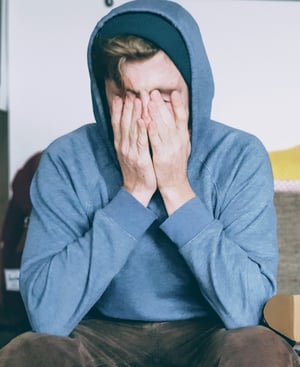 environment that’s significantly different than any that they’re used to. They’re often trying to balance course work with a job - in addition to social and family obligations. And they’re doing all this while also trying to chart out a plan for their entire future (and trying not to think too hard about all the student loans they’ll need to repay upon graduation). While that is a lot to handle, some of that anxiety can be mitigated with upgrades to the way that they manage their demands, or their Executive Functioning. The two students you’ll be reading about show the connection between anxiety and Executive Function - and how learning more effective self-management techniques can help to lighten the emotional load.

The Curse of the Blank Screen

Hannah is sitting at her computer, chewing her fingernails off, staring at the blinking cursor on a blank screen. It’s midnight and her essay is due at 8 a.m. but she can’t seem to get it started. Or, rather, she can only start it. She’s written a first line a dozen times, but it always sounds stupid to her, and so she ends up deleting it. She knows she shouldn’t have left it until this late to write and now she finds herself in the grips of a whopping tension headache thinking about how bad this paper is going to be.

The Connection Between Hannah’s Writing Anxiety and Executive Functioning

It’s not like Hannah thinks she’s a bad writer; she’s always done relatively well with her papers in high school. So what’s the difference here? This is her first college essay, and her professor is really smart (in fact, his list of publications is longer than the class syllabus). Everything that she’s typing feels dumb to her in comparison. She could often get away with leaving essays to the last minute in high school, where it seemed the grading was a little more forgiving and she didn’t stress about the high stakes, like she is now. Every time she thought about starting this essay earlier, Hannah confronted that inability to sound the way she wanted to sound and then she put the paper off. To put this in Executive Functioning terms, Hannah is experiencing difficulty with task initiation with her writing. It’s not uncommon for students to experience this type of avoidance when faced with new, challenging tasks; Hannah just needs a better strategy for approaching assignments like this.

Rather than trying to make her writing sound perfect right out of the gate, she might try to make her goals more bite-sized. For example, she could set a timer for five minutes and commit those five minutes to getting words on the page. Or, if the thing that feels too big about the task is expectations, not the time she needs to spend, she might try a different strategy. For instance, she could cover over her screen and use voice-to-text writing to speak her ideas for her essay - allowing her to focus on getting her ideas out without worrying yet about how they look. In so doing, Hannah might learn that taking on big problems in smaller chunks helps her to short-circuit this avoidance and experience less anxiety when working on the task.

Nick is enjoying his second semester in college. He’s taking a full load of classes that he mostly likes, playing intramural soccer with a great team, working 10 hours a week helping other students in tutoring center, and getting along great with his roommates and new friends. So what’s the downside? Nick is constantly worried about time. When he’s playing soccer, he’s feeling anxious about needing to study for an upcoming psychology exam. When he’s taking his psychology exam, he’s worrying about whether he’ll be on-time to his first tutoring appointment that afternoon. When he’s hanging out with friends, he’s thinking about the fact that he needs (by Monday!) to write up his biology lab. It’s like his anxious brain never shuts off.

A Connection Between Nick’s Time-Related Anxiety and Executive Function

Nick’s anxiety about juggling all of his activities comes from a good place: He is a thoughtful student who wants to meet his obligations successfully. But without a routine or organized approach to managing his commitments, he’s left with a constant nagging that creates an ever-present feeling of stress. To put this in Executive Function terms, Nick is experiencing emotional disregulation due to ineffective planning, prioritizing, and time management techniques. If Nick learns more about how much time different tasks take him and then uses that knowledge to create a schedule for each day, he’ll begin to build confidence that there’s time in the day for him to get things done - and he won’t have to worry as much.

In order for Nick to create daily plans, he first needs to gain insight about his actual working habits. Nick can create a list of to-dos, make a guesstimate for how much time he thinks it will take him to complete them, and then record the actual amount of time it winds up taking. This way, Nick might learn that he’s a faster reader than he thinks, a slower cross-campus walker than he thinks, and a right-on-the-money 10-minute showerer. Armed with this knowledge, Nick can begin to create a day-to-day schedule (using something like Google Calendar or iCal) that accurately reflects how much time he needs to attend to different tasks. Seeing that there is time in the day to get things done will allow Nick to more completely indulge in time with friends, knowing there’s a block of time the next day when he can tackle his 2-hour-and-15-minute lab report. He may also find that he’s trying to squeeze too much into his day and end up cutting back on his work hours or curtailing a little socializing after soccer games in order to feel confident that he’s on top of his priorities.

College is hard. But when you can relieve some anxiety with better Executive Functioning, it gets a little bit easier.

Photo by Christian Erfurt on Unsplash 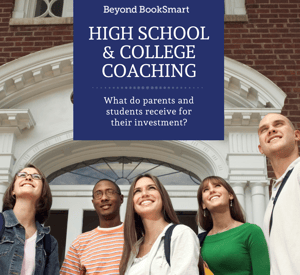 Read our latest report on the costs of college and the skills students need to get the most value out of their tuition dollars.

Why Smart Kids Can Struggle in School

Exhausted by the School Year (already)? ...

The school year that seemed brand new just one month ago is now entering the “routine” phase that tends to make the weeks and months fly by. But befor...

Each school year, students begin a new chapter in their educational journey. And historically, this time has been a mixed bag of emotions - some excit...

College planning can be both exciting and stressful. While students and parents celebrate this new stage and its milestones, for many, one question lo...